It's the Start of Something New

It's officially the start of the school year, which means we're back at it on the Collin Wylie campus!!

This past month has been full of ups and downs, but through it, I can see the answer to my prayer at the beginning of the summer when I asked God to cultivate a deeper desperation in me for him.

When praying about how to approach my blog this school year, the idea of invitation and being unimpressive came to mind. A lot of the apprenticeship, I wanted to clue you guys into what we were learning in classes and what God was teaching me, which was needed and great. However, I don't know if I ever did a good job of just being unimpressive a lot of the time. So, this school year, I want to seek to tell stories through photos I gather throughout the month. Rather than them just being a tag on a lengthy blog entry, I want them to be the focal point this year for y'all to get a glimpse of what I view day in and day out-in ministry, life, etc. None of these photos are professional, but, instead, are random photos from my camera roll. All with funny and sweet stories behind them, full of life, laughter, tears, and heartfelt memories that God is consistently using to change me and others from the inside out. I pray that sharing these small segments of my life will minister to you too. 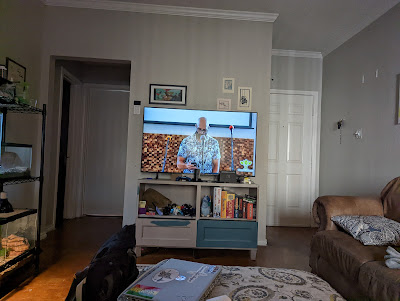 1. Here we have pictured my rag tag little living room. At this moment, I was livestreaming the Wylie Northeast Church the first Sunday of the month because Connor came down with COVID after CTF Camp while I was also sick with an upper respiratory infection. For some reason, I look at this moment with contentment because here I was, still able to engage with the Body of Christ despite being sick. Like, wow, isn't technology amazing. Even more so, God was forcing me to rest and slow down, which was so needed at this time. While being quarantined wasn't great, I was grateful to do it with my best friend, and even more so, I was grateful to have mornings like this. Mornings that I could slow down and reflect with God (though I didn't always do that well). 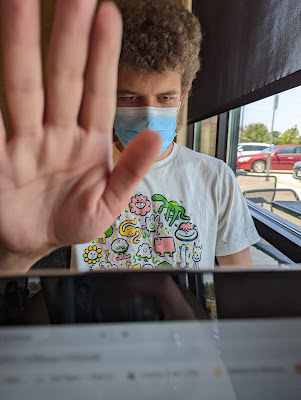 2. We finally got out of quarantine! Connor tested negative, and I still was for some reason. So, we both packed up our backpacks and headed to a Panera Bread to do work. As you could probably imagine, being at home was the last thing we wanted. Connor also isn't the biggest fan of me randomly taking his photo. So, of course I found this comical when I took it, and had to include it. I think specifically, I wanted to include this because of how much joy I was filled with this day. Not only for being out in society again, but getting to spend time with each other during the time we did I think was much needed for us. Since being married, we had noticed that most conversations we were having were more serious than not. So, just being around each other and goofing off consistently was a breath of fresh air for the both of us. 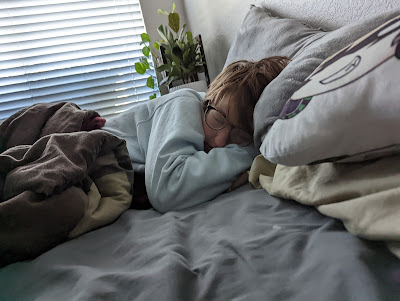 3. I finally came down with COVID. Two days after freedom, I tested positive. Which meant I missed out on staff retreat. Every fall and spring, the FOCUS staff go on a 3-5 day retreat to spiritually prep for the semester and to build relationships with our team. I was extremely looking forward to this. So, you could imagine how bummed out I was with not getting to go. On top of that, I felt like I hadn't seen my staff team in forever. So, it was hard not to feel out of the loop or left out-which was no ones fault! While I did throw myself some pity parties, through this time, God showed me a lot about my own heart and short comings, while also teaching me the idea that he doesn't need me in ministry, but wants me here for some reason . God still does what God does, whether I'm in the picture or not, and I can choose to let that hinder me or embrace it as a grace from God (which is still a concept I'm struggling with to be honest). Either way, COVID is not fun, and I don't recommend it. Connor did have fun stealing my phone though and taking photos of me sleeping. 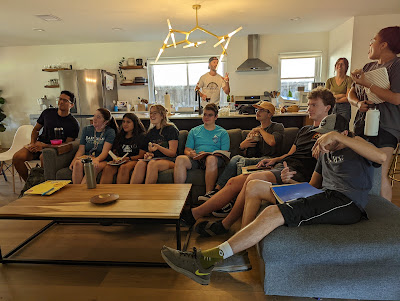 4. This is a photo from corefa prep day! Corefas are our small group facilitators, and on this day, we went over some details here and there about ministry, being a corefa, expectations, and overall, just how to set them up for a good year that leads to obedience to God. Specifically, this was to train them over what to do during the first week of school, when we'd be on campus every day doing outreach. I'm honestly so encouraged by this leader team, but I'll get more into that later. 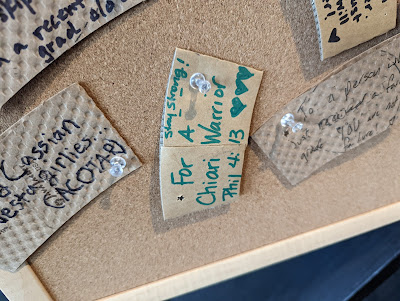 5. At a local coffee shop in Plano (Mudleaf), they do this thing where you can prepay for someone to get a coffee. All you have to do is write on the slip who it's for, and whoever meets what's written on there can claim their free cup of coffee! I took this photo to send to one of my close friends who currently is struggling with Chiari. She was one of my roommates in college, and honestly, has been one of my most consistent and faithful friends since. Man, now I'm crying while typing this out. Recently, she was able to finally have surgery to help treat the condition she's been suffering with for who knows how long now. Only about a year ago did physical symptoms start showing up for her, but I genuinely have been so encouraged and inspired by how she consistently praises Jesus throughout this entire process. Even though she's currently disabled due to this and other health issues, I have never seen her more on fire for God than how she talks about him now. I hate how's she's hurting, but she's truly an example of what it means to rejoice despite the heartache of this world, and makes me honored to call her my friend. For those who don't know what Chiari is, I would highly recommend looking it up because it does affect people differently, but essentially, it's a malformation in the skull that can put pressure on the brain. 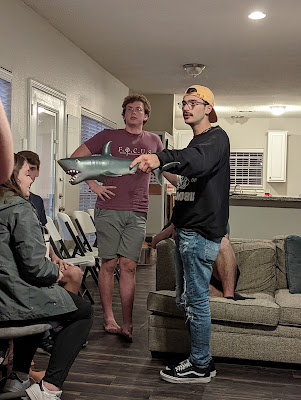 6. Here's just a random photo of one of our corefas, Graham, being Graham. I really don't know what else to say about this photo except for the fact that I chuckle at it every time I see it. The leader team is already full of good friends, which makes it easier to be comfortable and ourselves whenever everyone is gathered together. If anything, it feels like a little family reunion whenever we have leader meetings with the corefas. 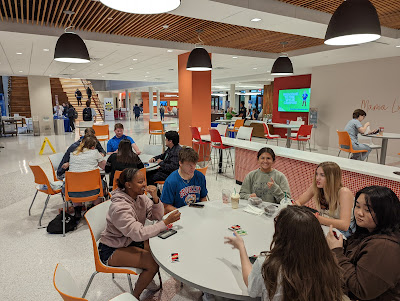 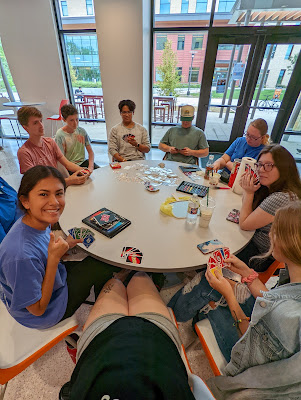 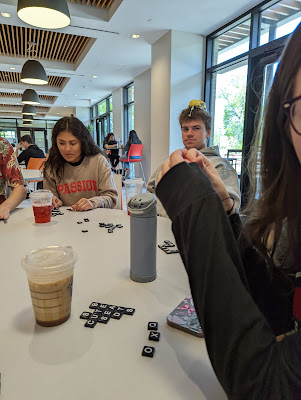 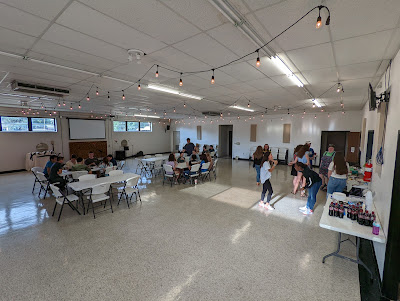 7. Welcome Week is here!! I figured it would just be easier to lump together the above photos since they had to do with the same topic. Throughout the first week of school, David and I showed up with board games and treats and just sought to get to know students, and MAN, did I see God show up. Continue praying for the Wylie campus as we go into the school year because so many of these students are eager for friendship. Immediately out the gate, several of them opened up about hardships they're going through, and others opened up about their faith and belief in God. I genuinely see so much of the Spirit moving here, and I'm so excited to continue partnering with God in doing campus missions this year. What's also been really cool, and if you guys could be joining me in prayer for discernment here, I've been meeting a lot of young moms seeking to go back to college. For several of them, they have multiple kids at home. So, they can't easily come to events or small groups. This makes me ponder over how I can meet them where they are and be some of their biggest fans. 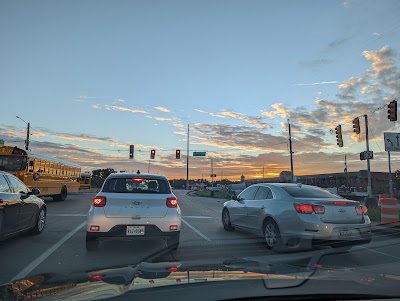 8. Back when I was in college, I worked at an after school care job, which was so long and tiring. However, at the end of every day, we'd always get off when the sun was setting. Seeing those beautiful sunsets was almost like God saying 'well done good and faithful servant', as if getting to see his creation was a small gift and reminder to me that he was still with me. I was reminded of this when I saw this sunset during Welcome Week, that despite how tired and worn I was, God was pleased with what was happening. 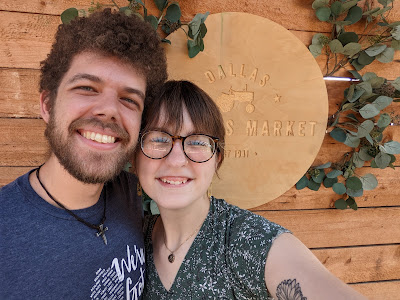 9. After a long week, Connor took me out on a date to the Dallas Farmers Market! Just wanted to include this here because I do love this man a lot, and am grateful I get to do things for the Kingdom along side him. I think something I've been so encouraged by is seeing his love for the two teens he meets with. I've been so impressed at how diligent and intentional they've been in reaching out to him and making time to read scripture with him (like, what teenagers want to do that). This has felt like a major answered prayer from God as he's been trying to tackle what being involved in that ministry looks like in this new season of life. 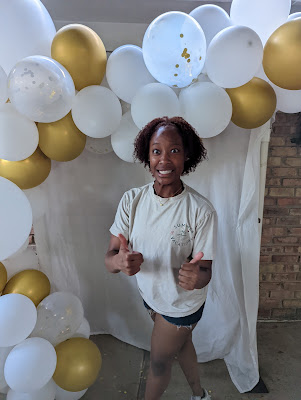 10. This is Laiya, she's a goober and such a good friend. Speaking of teen ministry, I've known her for almost 3 years now because of that ministry! I was an intern for CTF back in 2020, to which I first got to know Laiya and develop a friendship with her. Fast forward, she was in my small group last year, to which I studied the Bible some with her, and now, she's leading a small group with me! How cool is God, and how sweet can friendships be! I'm so excited to get to spend time with her again this year, and continue being one of her biggest fans. Hopefully she isn't sick of me by the end of it. 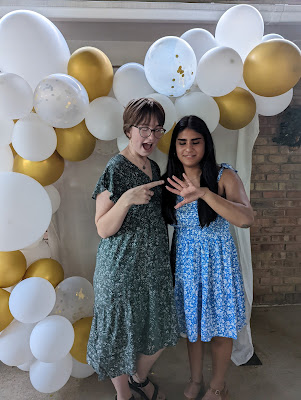 11. MY FRIEND IS ENGAGED!!!! This is Aless, one of my roommates from last year, and genuinely one of closest friends now. Last year, she became like a little sister to me, and so, whenever I get the chance to see her, it really makes my day. And now, she's getting married! Kolton, her now fiancé, put together a surprise party for her with some of her friends and mentors to celebrate. I have consistently been so encouraged by their relationship, and it makes me so happy to see them consistently growing in God, especially as they've considered marriage. Kolton is also one of my favorite people, so it's hard to not be excited for them. This photo is definitely candid, and I have some ones of us actually smiling and posing, but I thought this one was more appropriate to who we are and the awkward weirdos we can be.

And that's it! Hopefully, this encompasses at least an overall scheme of all I experienced, felt, and pondered this past month. I'm so excited and encouraged by what God is doing in our students and on these campuses, and I'm beyond honored that I even get to witness it. Thank you all so much for your support and prayers, and I am so excited to continue sharing with you what all is happening.