Hello and greetings to all!

I hope this update finds you well and ready to dive into the summer months-because I know I am. April really held up to the idea of new life and new beginnings, and also, to the idea of finishing well. On one hand, much like Christ finished well in carrying his cross and being obedient to the end, I had to learn this month the idea of preparing well and being obedient until the last stretch of different areas of my life. While, on the other, I had the opportunity to witness first hand the idea of Christ making all things new in my life and in others. All this to say-April really was a wonderful month in ministry. Specifically, I want to highlight two stories that occurred this month that will hopefully leave you just as encouraged as they did me.

During SSI week back in March (a outreach based week), I had the opportunity to meet a professor at Collin College who turned out to be Christian. This lady was extremely enthusiastic about her art, her love for Jesus, and the work she discovered we were doing on campus. Long story short, she gave me her number and I reached out to grab coffee with her. At the same time, I was wrestling with the idea of taking classes at Collin next semester in order to outreach to students.

When we met, we talked a lot about faith, her time as a professor (to which she is one of the first 13 professors at Collin! How cool is that!), her relationships with her students, my job with FOCUS, and what ministry has been like this year. I'm not gonna lie, I was extremely nervous to meet with her because I had no clue how it would go. Well...this woman not only encouraged me in my job, but also took me to her classroom, introduced me to her students, gave me other contacts to meet, encouraged me to take her class next semester, AND is joining my support team. This all occurred within the span of an hour, and I couldn't help but admit that this was God at work through her.

If anything, this encountered assured me once again that God has had this campus in his hands WAY before we even considered planting FOCUS at Collin Wylie. Even more so, I genuinely believe God has had a plan for Collin before it was even considered to be an established college. It's an honor and privilege that I even get to invest into this campus the way I do, and this moment reminded me of that.

Hope in my Emotions

As part of our classes this semester, we've been going through the topic of Body Stewardship. Which, if you're interested or curious, would LOVE to talk about more because this class, along with other similar conversations, has reshaped the way I view the body in relation to God. As a short synopsis, most Christians believe that, when we die, our souls go to heaven. However, that's actually a Greek thought because it assumes that the soul is higher ranked over the body. When, in reality, God cares very much about our bodies and the way we treat them. Heck, even Jesus was physically resurrected, not just spiritually. So, why would we think any different about our own bodies?

Mini rant aside, a lot of this class specifically talked about how we could better treat our minds, emotions, and bodies better as Christians. We discussed nutrition, exercise, stress, and most importantly to me-mental health. For those who don't know, I was diagnosed with PMDD back in November, and to put it simply, it's a hormonal disorder that causes extreme anxiety and depression in certain weeks of the month. I've struggled with my emotions and hormones for most of my life. So, getting this diagnosis was a relief and really helped to put words to what I've been dealing with for so long. However, it doesn't mean the struggle ever became any less, especially under the stress of ministry.

Something I've been wrestling with on and off for a while is the idea of ministering to girls well in the midst of hard emotional days. Countless times I've been left frustrated at myself and feeling hopeless for the way I can't control my emotions or reactions during different situations. In ways, I've bought into the lie that I'm just too much and too subjective to be doing this job well. However, when I asked Garrett (the Collin FOCUS director) about this, since he was teaching the class, he spoke some much needed truth into my life that has given me hope to cling to.

Essentially, he pointed out how I am disabled with my emotions-there just naturally is a gap there for me. Just like someone who would have a physical ailment, I have something mental. Yet, why would I look at that person who struggles with something physically and say God doesn't love them? I don't, so why do I say that for me? Even more so, why would I buy into the lie that handling any of these things would be on my strength, especially if it's something I won't ever fully be 100% at? Garrett reminded me about ministering to those out of my weakness, and that this was an opportunity for the Spirit to work through me rather than me to work through myself. So, I could either press into that, or continuously fall back into the lies I've been buying into. 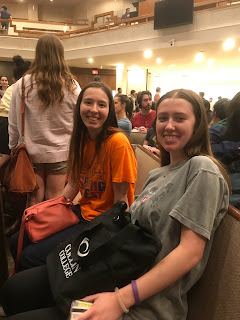 Here's Mariah and Sara at Pizza Theology this semester! This is just one of the times we talked more in depth about how God views the body. 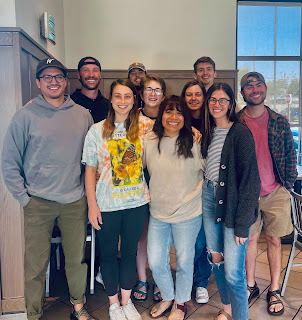 Here's our sweet staff team at Collin! It really has been a treat working with them. 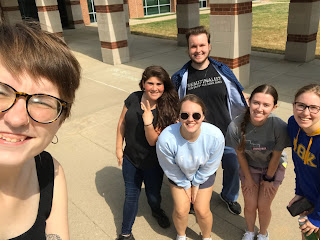 This month I also hosted a prayer walk on campus. It was definitely an encouragement seeing our students come out for this. 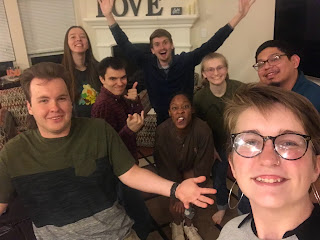 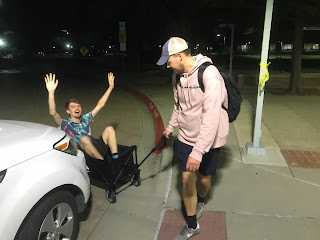 This is just a random photo of David and Austin being goobers after cleaning up TNF one night. It's been sweet seeing their friendship grow.

Why this doesn't even begin to cover all of what happened in the month of April, I hope it does leave you with a glimpse of the Spirit at work during this apprenticeship. I hope and pray that these stories minister to you and remind you of the hope we do get to have in Christ, and how nothing we do or accomplish ever gets to be on our own strength.

Again, thank you all so much for your support and prayers. Your contributions have helped shape the ministry at Wylie, and have helped to shape into a better minister long term. I would love to know if any of you have any prayer requests, especially going into the summer. So, please let me know! Thank you again.