Next Year Decisions and Reflections

Hi to all my ministry partners and more!

Hope this update finds you well! It's crazy for me to think that it's already March, but, at the same time, makes me so excited because of all the exciting things going on this semester.

First and foremost, I officially decided to stay on staff with Collin FOCUS for one more year. This means, after May, I'll be moving from being an apprentice to a senior staff position, which entails less classes and a lot more hands on ministry with the campuses and students. So, where I've only been able to spend about 10-ish hours a week investing in students, I will now be able to spend around 30 hours a week. I'm super excited about this opportunity because of what God is doing at Collin Wylie, and, also, it will allow personally for some comfort and stability in the midst of a lot of transitions for me this next year with marriage, moving, etc.

With that, I'll also be fundraising my salary again much like I did this year. So, if are currently one of my partners, I would love if you could prayerfully consider staying on as one of my partners again for this upcoming school year. If you also know of anyone who would like to join my team, or are currently not, but are interested in joining, please reach out and let me know! You can contact me at orion.childers@anyfocus.org if you have any questions.

Again, this year would not be possible without any of your prayers or support. These students have been so impacted by the ministry this year, especially coming out of a COVID year, and that's first and foremost due to each of your contributions. God is so good, and it's so cool getting to see the Kingdom work firsthand in this way.

Things have been interesting at Wylie. With outreach, David and I have decided to split up our outreach times on campus to get to know as many students possible. So, he's kept with our initial Wednesday 11-1 time that we established at the beginning of the semester, and I...well, let's say it's still a work in progress.

Initially, I tried doing outreach Friday mornings from 8-10, which wasn't a great idea since I soon discovered that campus had literally no one there during this time. So, I emailed the head of student engagement and asked her about when she felt like students were going to more than likely be on campus. She gave me a few times, and I decided to experiment a bit.

These past few weeks I've been going to campus Tuesday 2-3:30pm, which has been a decent time with meeting students. However, during this block of time, students are either on their way to or from class, which doesn't give them much leeway to sit and chat. I also definitely have some comical stories from these times on campus to. So, please feel free to reach out and ask about them! Collin students are wild, man. Finally, however, after a discussion during staff meeting, I finally landed on now doing outreach on Tuesday from 11-1, which would allow me to talk to students more about their faith rather than relying on an event I create. So, I'm extremely excited about what this might look like for the rest of the semester. If you each could be praying of this time and that I'm able to step out of my comfort zone with having more intentional conversations, I'd also appreciate that!

In other news, we're also sending two students from our core to the Student Institute of Campus Ministry (SICM). This is an invite only conference held in Washington State by our sister ministry CCF that seeks to train students in leadership and what it means for them to evangelize their campus. I went to this as a freshman in college, and it was seriously pivotal for me in gaining skills and understanding more about what the Great Commission meant for me as a student.

What makes me most excited about this is the fact that one of these students I've known for years now from our teen ministry, CTF. A few years ago, I did an internship with them and met Laiya, who is now a freshman at Collin Wylie. To get to be her friend over the years, and now a mentor, has been so humbling and exciting because I genuinely have seen the Spirit transform and refine her. Now, she's a worship leader at Collin FOCUS, and is getting the chance to go to SICM! How cool is that!

This past month has also been jammed back with different events. Staff Retreat and Showcase being the biggest ones.

For a week out of February, the entire FOCUS staff went to a town outside of Waco to spend time with each other and to learn more about God and his heart for us. Initially, we were suppose to do this at the beginning of January, but due to a spike in COVID, we rescheduled it.

To say that this week was a restful time for me would be a lie, but that's mainly because I'm someone who is going to feel physically exhausted after any trip-even if that means a vacation. I also ended up getting covered in chigger bites due to taking a nap in the Hill Country grass, which didn't help with anything either. However, this time was definitely intentionally and purposefully put together by our directors, and you can tell. The sessions, while heavy at moments, really had us each reflecting and thinking more about what being a follower of Jesus meant. At one point, they even had us staff take an hour and a half in silence to let God communicate to us what he wanted.

To me, God communicated the idea that he really did want to kill my ego if I were to let him, and dear goodness, do I want him to. Pride has always been a thorn in my flesh, and to think that I get to live a life in him where I do not have to be concerned for myself is so freeing. 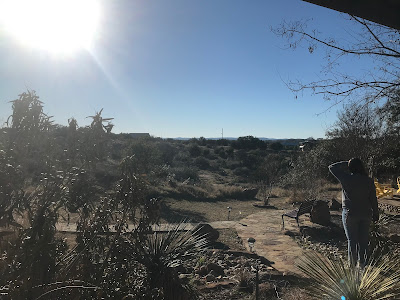 Here's what our view from our cabin was like at Staff Retreat. Ashlyn was a little blinded by the sun. 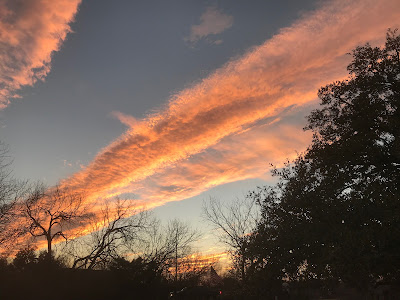 Here's a photo of one of the sunsets I got at Staff Retreat. Again, this was such a neat experience with getting to be God's creation. 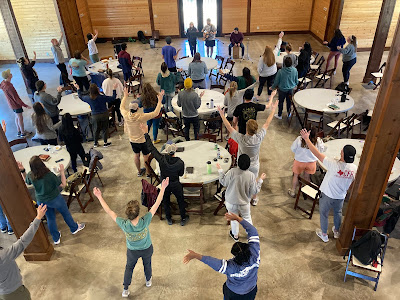 At retreat, we usually started and ended our day with worship.

Showcase was also a huge event put on by our staff this month. Every year, we have a showcase of talent in the community, along with an art show. This acts as a big fundraiser for our students going to SICM, and this year was a high success. Though I don't know the exact totals, we almost had full house for the evening showing and almost all the art sold that was donated (I may have snagged 4 pieces myself). If you weren't able to make Showcase, but would like to watch it, just follow the link here! The video is free but donations are still accepted. 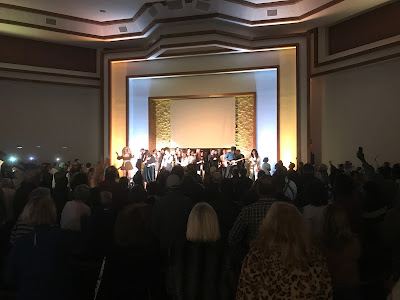 Here's a photo from Showcase. All the performers joined on stage for the last song of the night!

So, yeah! In between all the snow storms, prepping for Showcase, wedding plan, and other stuff, it's been so cool watching God at work on the Wylie campus, FOCUS at large, and even just through church and friends. Thank you so much again for your generous support through prayers, check ins, and donations. It really does mean the world, and I'm so excited to see what God continues doing in the future.